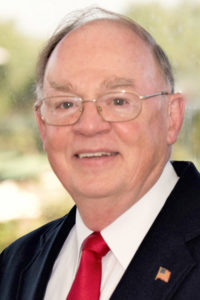 ROBERT “BILL” HASTINGS is the founder of the Hastings, Laun & Houser, LLLC law firm. He has been a fellow of the American College of Trust and Estate Counsel since 1988, serving as Hawaii State Chairman from 1995 to 2000.

Mr. Hastings has been listed in The Best Lawyers in America since 1989 and has been recognized by Honolulu Magazine as one of Hawaii’s “A+” attorneys.

Bill currently serves on the board of the North Hawaii Community Hospital and the Grassroot Institute of Hawaii and is a trustee of the Anna Perry-Fiske Charitable Trust. He has previously served on the boards of the North Hawaii Hospice and the Parker School Trust. He also served on the advisory board for the West Hawaii Fund and as a member of the Hawaii Island Leadership Council of the Hawaii Community Foundation.

Bill began his law practice with the Honolulu firm then known as Torkildson, Katz, Jossem & Loden in 1977. In 1983, he moved to the Big Island, opening a branch of the firm in Kailua-Kona. In 1995, Bill left the Torkildson firm, acquired their Kona office and continued his practice there. In 2000, the firm moved its main office to its present location in Waimea (Kamuela). On July 1, 2013, the firm was reorganized and his long-time associate became a partner in the present firm.

Mr. Hastings has participated in numerous seminars and programs on estate planning and gift and estate tax law for the Hawaii Institute of Continuing Legal Education, the National Business Institute, Professional Education Systems, the Hawaii Society of CPAs, and the American College of Life Underwriters, as well as for several business and professional groups. Bill has also taught Estate Planning as an adjunct professor at the Richardson School of Law.

Reviews From Our Happy Clients

Dearest Bill, Mahalo a Nui Loa so much for your steadfast and constant support in assisting Marsh, Atai and I and Mom in cutting through and making li …

Trusted In Hawaii For Over 35 Years